I made my first diaper cake this summer. For those of you living under rocks, or who never watched Sex and the City, a diaper cake is a centerpiece made of diapers that is supposed to look like a tiered wedding cake.  The mom-to-be can then use the diapers. So basically it's a cute way of giving a box of diapers. 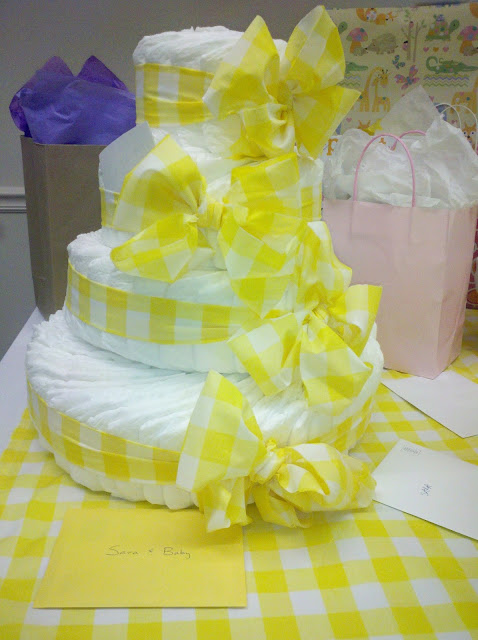 In my case, it took two boxes of diapers - 180 diapers total! I used the "no roll method" featured here because rolling 180 diapers into tubes seemed like a ridiculous pain.

Posted by Christy at 5:36 PM No comments:

Guest Bedroom for My Mom

I've been neglecting my sad little blog but I promise it's not because I haven't been doing anything. I've been doing lots. I just haven't taken good pictures of anything that I've done. I started this post forever ago, but never published it because I wanted to take better pictures.  Apparently that's not going to happen so I'm posting anyway.

My parents bought a new house about a year ago and my mom let me play decorator for one of the guest bedrooms. She wanted to use two twin beds that she already had but everything else was new. So I made headboards with matching bed skirts, drapes and pillows.  As usual, I completely underestimated the amount of time that it would take to make everything.  There was a four day span that I felt like I was working in a sweat shop but I'm pretty happy with the way everything turned out.

I actually made the drapes the right way (with a proper lining and big hem). That was a bit of a pain but the results were totally worth it. The drapes just hang much better that way. The instructions I followed are here.

I made the headboard using a method similiar to this one at Better Homes and Gardens.  The headboards are actually mounted to the wall rather than the bed using a french cleat (is it just me or does that sound dirty??).  I find this keeps the headboard from being wobbly.  Also, the french cleat allows you to slide the headboard to the right or left without drilling new holes in the wall so  placement doesn't have to be perfect.

The night stands, turquoise pillows, and duvets are from Ikea.  The fabric for the headboards, drapes and bedskirts came from Ocho, my favorite budget fabric store.  The rug is also from Ocho.  The fabric for the sage green pillows is from Lewis and Sheron, my favorite splurge fabric store.  The mirrors are from Homegoods.  I think my total budget was around $600 which was only possible because of Ocho.  The headboard fabric was only $7.50 a yard.  The 8x11 wool rug was a steal at $200.

This room is definitely a work in progres.  I'm working on accessories and art and hope to soon have a finished room with better pictures. 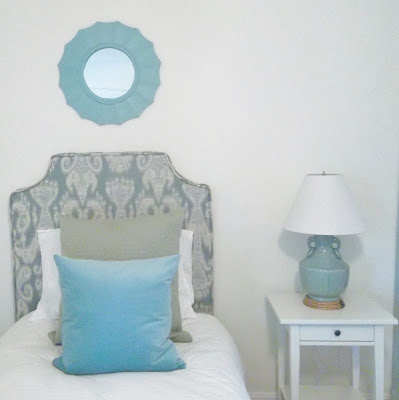 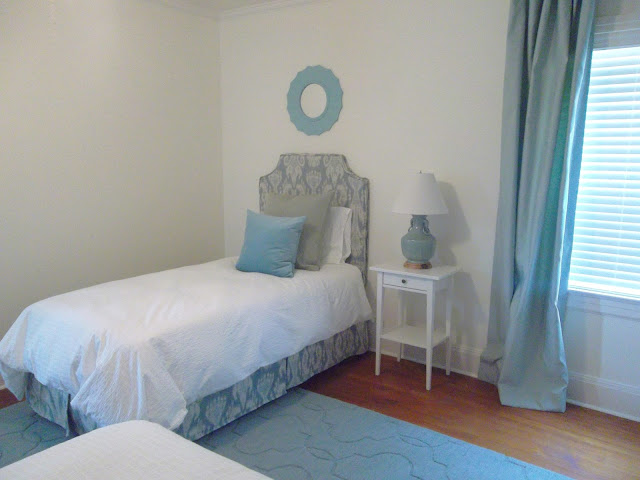 Dear Chairs, I Give Up - A Cautionary Tale of the Dangers of Painting Wood

When I first moved to Atlanta after lawschool, I ended up with my grandmother's kitchen table and chairs.  When I got the set, it was stained with a really pretty dark finish.   Unfortunately the set was pretty beaten up and needed to be refinished.

I didn't have the time or the inclination to properly refinish the set.  So I just slapped some paint on it and called it done.


In the past six years these chairs were painted white, then red (which was a horrible idea that I immediately rectified), then black, then white, then black again.

I recently recovered the cushions to match my new blue and grey color scheme.  I planned on just slapping another coat of white paint on the chairs but didn't like the look of the fabric with the stark white paint.

I decided the chairs would look better if they were stripped and stained.

I started sanding in December.

I just can't take it anymore.  I cannot bear sanding for another minute.

So I just bought these Parsons Chairs on Craigslist. 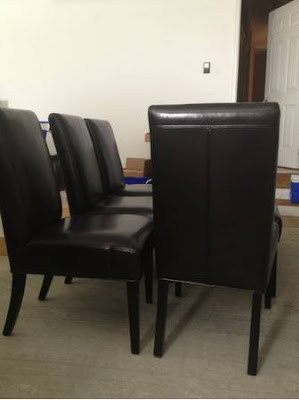 I plan to make slipcovers for them.  Hopefully that won't take six months.


﻿
So please, learn from my mistakes.  Please think twice before painting your stained wood.

Balcony Redo (i.e. How to Spray Paint Your Wood Floors)

I did some heavy duty spring cleaning last week.  Once I cleaned off the pollen, I realized that my balcony was pretty sad.  It definitely wasn't living up to its potential.  The red wicker patio furniture wasn't helping.
8 cans of spray paint later, my furniture was bright blue! I ordered a rug on-line that just happened to match perfectly.
I added some boxwoods in white planters and some topiaries. I decided to invest in the boxwoods to serve as foundation plants that would be green year round and not have to be moved indoors in winter. 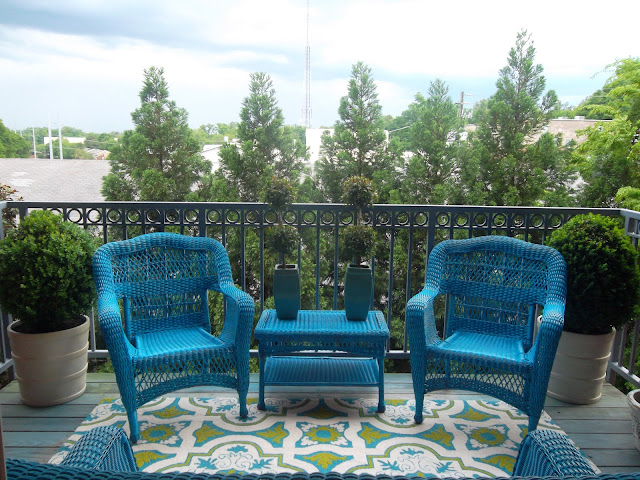 So I  was feeling much better about the state of my balcony.

Well, except for the blue floors.

Since I live in a condo, I don't exactly have a great space to do any sort of project like say, spray painting.  So I just use my balcony.

For this painting project, I just spray painted on a drop cloth.  Unfortunately it didn't quite cover the entire balcony.  Basically it just covered that area with the nice rug.  Luckily, the floor was already
weathered and faded, so the slight blue tinge just sort of blends in.  That's what I tell myself anyway.

Just don't look under the rug.
﻿

Posted by Christy at 1:42 PM No comments:

I needed a really odd sized table.  Something really narrow, but kind of long.  Like a console table, but smaller.  I'd pinned a few skirted console tables on Pinterest like this one:

So it occurred to me that it would be super easy to make a skirted table because no one would know what the actual table looked like!

So I went to Home Depot and bought 4 deck baulsters (for $.89 each) to use for table legs.  I just planned to screw these into a spare piece of pine board to make the table.

Obivously I am not a master carpenter, but even I knew that this table would probably be super rickety.  So I found these rubber leg tips. 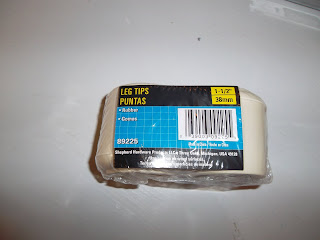 Of course the rubber leg tips were meant for round legs, apparently like for crutches or walkers.
And my deck baulsters were square.
And you know that old saying about square pegs and round holes.
But whatever, I like to learn my lessons first-hand.
Anyway, so whoever said you can't put a square peg in a round hole obviously wasn't trying hard enough.  Or the peg was too big.
I managed to get the tips on the legs and the legs screwed to the board pretty quickly.  It was still pretty rickety so I ended up adding an apron to further stablize the table.
Then I made a table cloth to cover it.
Viola!  Skirted console table
I certainly wouldn't dance on this table.
But I never dance on tables anyway. Only bars. Dancing on tables is tacky.
But it is sturdy enough to hold a vase and couple of picture frames.
Most importantly, the skirt hides my router, roller skates and a couple of other random objects that I have no place for!
﻿
﻿
Posted by Christy at 7:12 PM 3 comments:

Last night I joined a co-worker at Dip N Dab.  You know one of those places where you BYOB and they provide you with paint, a canvas and instruction so that YOU TOO CAN BE AN ARTIST!  Last night we knocked off Vincent Van Gogh.


As much as I hate mass produced art, I really like Dip N Dab , or Sips N Strokes, or  Canvas By You.  I always leave feeling talented and really inspired to go home and paint.

Once I get home and get out my paint,  I realize that I am not a talented painter.   I guess that's why Dip N Dab is in business.
Posted by Christy at 6:00 PM 1 comment:

Making a Palm Tree out of Pineapple

So I've been neglecting my blog, but seriously, I promise it's not because I haven't been doing anything.

I have been doing LOTS OF STUFF.

I just haven't exactly finished ANYTHING.

But there's no rule against posting something that I created two years ago right??

So here's a centerpiece that I made for a tiki party that we threw for some friends who were getting married.  This was in 2011, the year that I actually finished things.  ﻿

To make the centerpiece I hollowed out some pineapples and stacked them on a frame I made by hammering two dowels into a piece of 2x4 (save the pineapple for your pina colodas! fresh pineapple makes them so much better). I used sago plam fronds from the farmers market for the plam leaves.  I poured some brown sugar on a tray to cover the base and create "sand." Obviously, actual sand would have been a more realistic and less sticky choice, but that would have required a trip to the hardware store.
Now you know how to make a palm tree out of pineapples for you next tiki party or luau.
Since its January, I know you're probably running out to buy those pineapples right now....
But whatever, that's not important.
What's important is that I have finished a blog post in 2013!
﻿
Posted by Christy at 7:30 AM No comments:

Decor Sites to Inspire (i.e. Sites That Cause Me to Overestimate My DIY Capabilities)